It’s only been a week since my last newsletter to you, but like in any Christopher Nolan movie, time is a little different in the startup world. It’s one of the many things I love about startups: Things get done.

Last week I introduced you to a magical—user’s description, not mine, but I’ll take it—feature that sniffs out anything that looks like a question from the chat comments. It looks a lot like this:

It allows the presenter to go back over the questions they may have missed while they were focused on delivering an entertaining show.

We’ve given livestreamers the tools to engage their audience, now it’s time to help them plan that engagement throughout their live stream. That’s exactly what our new feature will allow them to do.

We call it: Run of Show. And it does exactly what it says.

Run of Show allows you to set up your engagement tools in chronological order. Then, a click of a button can bring up your Magic Maps, Wonder Words, and pre-populated Power Polls during the live stream. The feature is a small step towards helping presenters have more control and be more efficient.

There’s a saying among startups, and especially among founders: Eat your own dog food.

Not in a literal sense of course. No one is actually opening a tin of Pedigree Chum and thinking, Mmm, yum!

It means you use your own product that you have developed. At StreamAlive, it’s about using the product during the live stream showcase events we host.

If you caught the newsletter last week then you know that we did a Whose Line Is It Anyway-esque improv comedy show. It was live streamed over Zoom and the audience had a blast as they directed the performers over at Improv Comedy Mumbai.

While there was an entertainment factor, the main purpose was to see how the audience reacted to the new Quick Questions feature and the opportunity to try out Run of Show in the background.

What makes a good question to ask in a live stream?

As we watch our users feature StreamAlive, we’re starting to document these learnings for our own community so that we can collectively raise the bar on successful, highly engaging livestreams.

Sometimes the livestreamer asks the audience a question and it just falls flat. No one responds. Crickets get embarrassed because everyone is looking at them.

Other times, the livestream chat lights up like the Statue of Liberty on July 4th (timely reference) and the audience goes crazy.

The reason is usually a scientific one. It’s all about cognitive load. Livestreamers that have figured out how to ask questions with the right cognitive load get the best response.

So what makes a good question to ask in a live stream (or any presentation)? We’re glad you asked, because we think we’ve found the answer.

We’re less than two weeks away from our public launch of StreamAlive on Product Hunt (please register for an account, we really need your help on launch day!).

Part of that launch includes creating an explainer video to explain what StreamAlive is and why it’s so important.

I had the team come up with ideas for the video, the only restriction being we don’t have a Christopher Nolan movie budget to get it done. Once we’d removed the ones that involved me dressed up like a hotdog standing in the middle of Brooklyn Bridge, we built a consensus around the following criteria:

We’ve now got a script in place, a camera crew booked, and a (secret) hotdog outfit rented. I can’t wait to see how it’s going to turn out!

Next week is 4th July week, so no newsletter next week, but then we’ll be in launch week and I’ll outline how you can be a part of the launch and help us scream to the world that StreamAlive lives.

Back to the dog food, Playing fast and loose with grammar and punctuation.

We’re just about coming down off our post-launch high this month. Thank you for all your support on ProductHunt—we were thrilled to be one of the top products of the week! 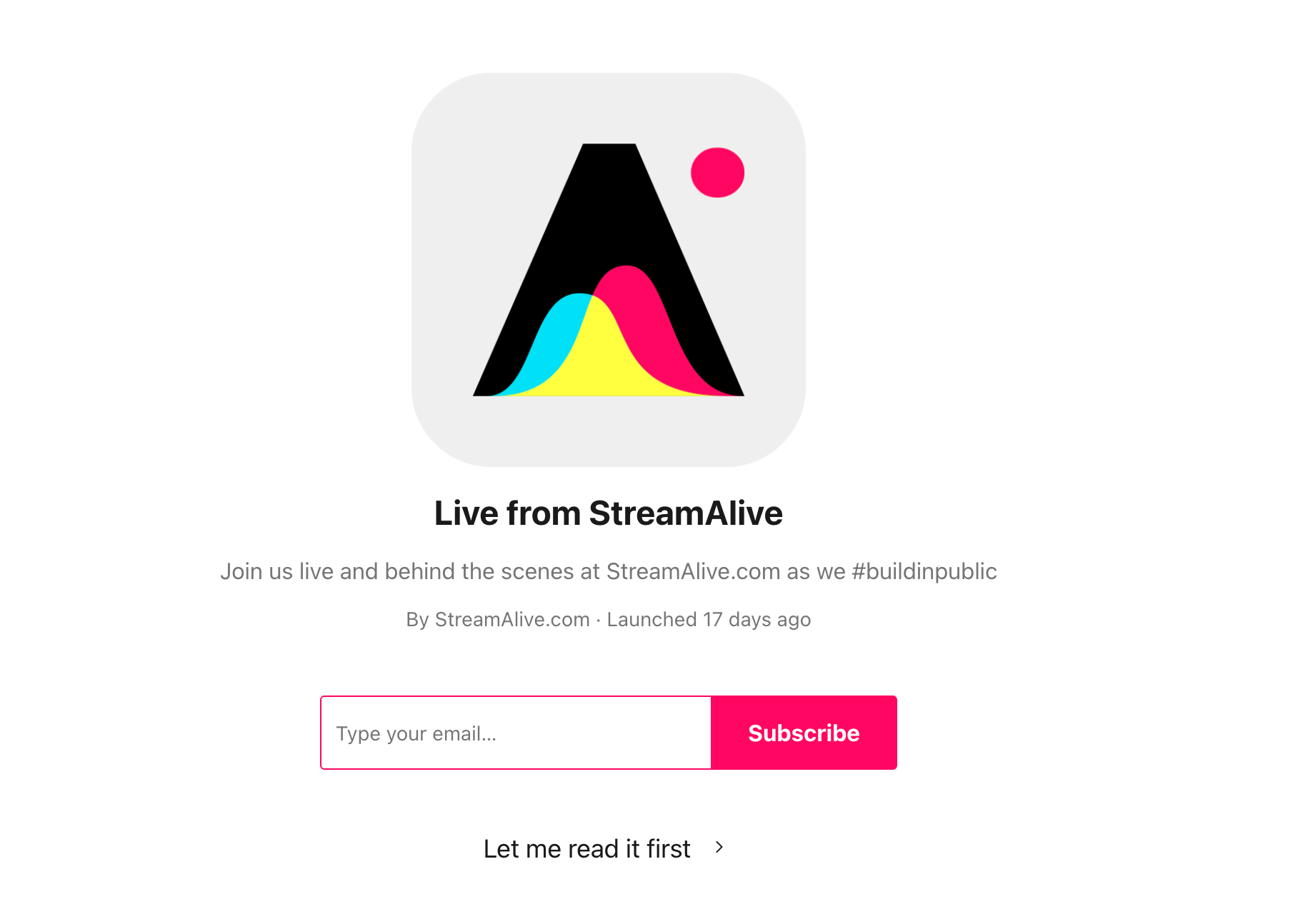 Namaste! Join us live and behind the scenes at StreamAlive.com as we #buildinpublic. We have a lot to say, we think :)